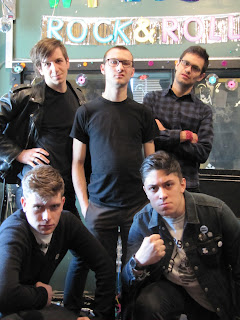 Chicago's Raw Nerve gasp their final breaths as they deliver a set of complete chaos and fury live in the WFMU studios. Recorded Easter Sunday the day of their last NYC show and one week before the band calls it quits, our listeners get to posthumously relive the magic one last time after their final performance on April 14 in Chicago with SQRM, Vile Gash, Manipulation, and Culo. This set spans their recorded output on the cult favorite Youth Attack Records, and captures Raw Nerve as one of the most brutally intense live hardcore bands of recent years. Dark, disorienting, violent, ugly, and ripping fast hardcore for the bold and adventurous listener. "Don't cry for me, I'm already dead." -Barney Gumble.

Later, we speak with Timmy Hefner, curator of the mighty Chaos In Tejas festival. In its eight year, this annual punk fest held in Austin TX hosts some of the most exiting names in underground music from all over the country and world. Performing this year are bands like Sham 69, Moss Icon, Nasum, The Clean, Saint Vitus, Dropdead, Midnight, Iceage, Ted Leo, Ringworm, The Mob, Toys That Kill, No Age, Screaming Females, Thomas Jefferson Slave Apartments and Big Freedia, as well as too many solid American DIY hardcore acts to list. We hear about the history and current state of Chaos, the DIY punk scene in Austin, and what Timmy carries in his punk pouch, as well as a mixtape of acts from this year. May 31 through June 2, 2012 Austin.
Posted by Deed Runlea at 12:28 PM